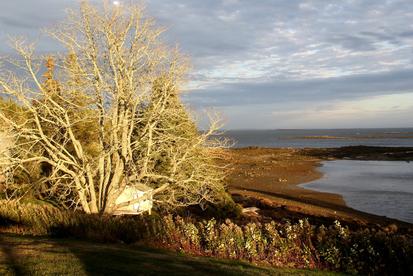 Each year, the jury for the Salty Quill Writers’ Retreat scholarships is honored to have so many outstanding writers share their work with us. We award as many scholarships as we can--in the past, partial scholarships have also been awarded. Jurors have found it an honor to review scholarship applications, appreciate and give great consideration to every application, and find great pleasure in awarding scholarships to the very talented writers listed below.

​TD Mitchell   Based in Brooklyn, New York, T.D. Mitchell is an award-winning writer of plays, teleplays and speeches for global NGOs. Her plays are critical of American foreign policy, culture and history, making it difficult to get them produced since the last Presidential election. She believes theatre, her first creative home, should be a public conversation provoking difficult questions, rather than passive entertainment spectacle.
Mitchell’s play about women in the military, QUEENS FOR A YEAR, was nominated for the 2016 Pulitzer Prize, among other awards. Her most recent fellowship was at the prestigious Chateau de Lavigny in Switzerland, where she was the only American writer invited in 2019. Last spring, she made the shortlist for the Alpine Prize for theatre. She has had multiple works featured at the Bay Area Playwrights Festival and the Ojai Playwrights Conference.
Mitchell is a tireless advocate for human rights, and for collaboration between female artists to bear witness and tell difficult stories.

Judith Pfeffer is a journalist and writer from Arlington, Mass. Two of her short stories have been published, and one won honorable mention in the Writer’s Digest Annual Writing Competition. As a journalist, her work has appeared in newspapers, national magazines, and online and won the occasional award. She has taught journalism and marketing, and has run public-relations campaigns for NPOs, agencies, and businesses. Judith used her 2019 Salty Quill scholarship to make much-needed progress on a long-planned novella.

2018​
Gemma Leghorn is a fiction writer who splits her time between Maine and Massachusetts. She earned her MFA at the University of Massachusetts--Boston and has worked at the Fine Arts Work Center in Provincetown for close to a decade. She is also a freelance writer and editor and is working on a collection of short stories and a novel.

Aube Rey Lescure is a recent transplant to the Boston writing community-- after graduating college, working in DC and doing lots of academic writing on Chinese politics & economics, she decided to save up money, backpack around the world for a year, and move to Boston to scrape a life together as a full-time writer (with part-time work to pay the bills, of course).
She's always known that literature and writing were her greatest passions, but it took her a while to decide they were my priorities. In the past year, she's shifted from non-fiction writing to short stories and a novel-in-progress, which is about two-thirds of the way to a full first draft after the GrubStreet Novel Generator program. It's a story set in the Shanghai of 2008 that follows a deeply troubled teenage narrator through major life changes in an anything-goes metropolis.
She grew up in France and China but has lived in the U.S. for almost ten years now. She's co-authored a book on Chinese politics/economics and translated another. Her creative non-fiction has been published on Medium, Entropy Magazine, Ripple Journal, and some college publications.

Tracey Palmer is professional freelance writer and editor. Her work has appeared in the Boston Globe, the Boston Globe Magazine, and numerous university and nonprofit magazines and websites. She was the managing editor and a contributing writer of the commemorative hardcover history, MIT Sloan: Celebrating Our Past, Inventing The Future (Third Millennium Publishing, UK, 2014). She is the founder of Chicks Who Write, an online professional networking group for women who freelance in greater Boston, and teaches persuasive writing to hundreds of nonprofit professionals every year. In 2016, Tracey completed the Grub Street Novel Incubator, taught by Michelle Hoover. She serves on the organization's alumni board and writes for its blog, Dead Darlings. She is represented by Ayesha Pande of Pande Literary Agency. Her unpublished novel, I Never Needed You Anyway, was selected as a finalist in the 2018 Writer's League of Texas novel competition. She lives south of Boston with her husband, two daughters, four chickens, and a dog.

​​Julianna Thibodeaux is a freelance journalist, editor, and creative writing instructor and coach based north of Boston. Although she considers herself a native of both the Midwest and New England—having grown up in Minnesota, Iowa, Massachusetts, and Indiana—now back in Massachusetts, she’s here to stay. While living in Indianapolis, she raised a family while working as a senior writer and chief art critic for an alternative newspaper, for which she earned several Society of Professional Journalists awards. She also taught journalism, edited an arts magazine, and completed a low-residency MFA from Goddard College in Plainfield, Vermont—a foreshadowing of her return to New England.

Tammi Truax, a graduate of the University of New Hampshire, works at an elementary school and as a Connections program facilitator for the NH Humanities Council teaching new adult readers. She has lived and worked in New Hampshire, Maine and Germany, and has taught in a variety of nontraditional settings from preschool to prison. In 2008, with NH poet Kyle Potvin, Tammi founded the non-profit The Prickly Pear Poetry Project: Processing the Cancer Experience Through Poetry. The project is a two-hour workshop based on the profound healing power of reading and writing poetry for people whose lives have been impacted by cancer that the two deliver at hospitals, oncology centers and churches as well as reaching out to people through Facebook.
Children’s literature is a lifelong passion and she has several picture books ready for a publisher. Most recently she was editor of a new release of Lady Wentworth; A Poet’s Tale by Henry Longfellow (illustrated) (Bookbaby, 2013), and released her debut novel, Broken Buckets, as an eBook. She is a published poet in seven anthologies, including The Widows’ Handbook: Poetic Reflections on Grief and Survival, Edited by J. Lapidus and L. Menn, with a foreword by Supreme Court Justice Ruth Bader Ginsburg (Kent State University Press, 2014), and has a short story in an anthology called Compass Points (Piscataqua Press, 2015). A volume of her poetry is due out in Jan. 2019 by Hobblebush Books. Her work can be found in several journals, newspapers, magazines, and online, including at The Huffington Post. In 2014 she was the first winner of The Provenance Prize for creative short fiction, and in 2013 and 2015 was selected to be one of the writers at A Room of Her Own Foundation’s retreat at Georgia O’Keefe’s ranch in New Mexico. In 2015 and 2016 Tammi was awarded the Buffler Poetry Residency at Portsmouth High School. She was also chosen in 2015 to attend Vermont's When Words Count writing retreat. Last September The Maine Writers and Publishers Alliance awarded her a scholarship to attend the 2016 Slice Literary Writers’ Conference in NYC, and was recently selected to attend The Tin House summer workshop this year. Tammi is a member of many writing and historical associations. The project she is working on now is a historical novel. She writes from her home in Eliot, Maine and is seeking representation for her work.​​

2017
Nancy Crochiere worked as an editor for McGraw-Hill and other educational publishers while she and her husband raised two daughters. For 15 years, she also wrote a humor column called “The Mother Load” for The Daily News of Newburyport, Mass., and North Andover’s Eagle-Tribune. In 2014, she collected her most popular columns into the book The Mother Load, which was a finalist for Foreword Reviews’ Book of the Year in humor and the Independent Publishers of New England Book Award.
Since leaving publishing to pursue her own writing, Nancy’s essays have appeared in The Boston Globe and Writer’s Digest. She is currently working on her first novel, Graceland. Nancy’s hobby is acting as an extra in feature films. In the movie Joy, you can catch her staring unapologetically at Bradley Cooper’s backside.

K. Stephens is a Maine freelance writer, reporter and author of several award-winning books, including her debut novel, The Ghost Trap, the story of a young lobsterman struggling with the grinding responsibilities of a head-injured fiancé and mounting trap wars. She is working on her next book, a historical fiction fantasy novel set in Prohibition-era Maine, featuring a conniving rum-runner posing as a lobsterman.

​Lisa Duffy is the author of The Salt House (Touchstone Books), named by Real Simple as a Best Book of the Month upon its June release, as well as Bustle’s 17 Best Debut Novels by Women in 2017, a She Reads Book Club selection and Refinery 29’s Best Beach Reads of 2017.
Lisa received her MFA in creative writing from the University of Massachusetts. Her short fiction was nominated for a Pushcart Prize and her writing can be found in numerous publications, including Writer’s Digest. She is the founding editor of ROAR, a literary journal supporting women in the arts.
Her second stand-alone novel, This is Home, is forthcoming from Touchstone Books in June 2019. Lisa lives in the Boston area with her family.

Siobhan Adcock is the author of two novels, The Barter, a ghost story about motherhood published by Dutton in 2014, and The Completionist, a dystopian mystery set in Chicago, published by Simon & Schuster, and named one of the Best New Books of June 2018 in The Chicago Review of Books. Her short fiction has been published in Triquarterly and The Massachusetts Review, and her essays and humor writing have appeared or are forthcoming in Salon, Lenny Letter, The Daily Beast, and Huffington Post. As a humor writing and creative writing instructor, she has worked with veterans, maximum-security prison inmates, New Yorkers, and most chillingly of all, undergraduates. A native of Chicago, she now lives with her husband and daughter in Brooklyn.

Pia Padukone is a writer and a proud native of New York City, where many of her stories take place. A graduate of Stuyvesant High School and the London School of Economics, Pia entered the professional writing world as a copywriter for advertising agencies. Pia was a finalist in the Seventeen Magazine Fiction Writing Contest and received a fiction-writing award from Women on Writing. Her debut novel, Where Earth Meets Water, was published in 2014 by Mira Books; her second novel, The Faces of Strangers, was published by the same in 2016. Pia lives in New York City with her husband and daughter.

​Mary Ann Barton’s novel, Eve’s Trumpet, is still in its first draft, which she began as a Salty Quill scholarship recipient and continued shaping in GrubStreet’s Novel Generator program. Along the way, she’s benefited from fiction classes with Eson Kim and novel classes with Sara Daniele Rivera, Tim Weed, and Colwill Brown, as well as one-on-one work with Grace Talusan and Mary Carroll Moore.